My Personal Journey with the Highwaymen 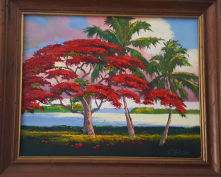 2011:    My wife Karen and I first discovered Florida Highwaymen art and began to learn their history when we visited the Venice Art Center in 2011 and brought home this Royal Poinciana painting by Highwayman James Gibson.

I promised myself that someday I would teach myself to paint in the Highwaymen style.

2014:    We soon decided that the artists themselves should benefit from their talents, so we began buying directly from them, rather than from resellers.

Shown here are Karen and I purchasing paintings from James Gibson at his home in Fort Pierce.

2015:   For inspiration, I decided to surround myself with "Highwaymen-inspired" landscapes.

Shown here is the first such painting I purchased, from Florida artist Stan Prather. This beautiful painting brought to my mind original Highwaymen Sam and Harold Newton.

2016:   Finally fully retired, I was able to begin teaching myself to paint for the first time.

I converted my home office into a studio and filled the walls with Highwaymen and other Florida landscape paintings for inspiration. 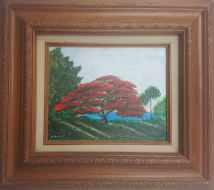 2016:   Shown here is my first "Highwaymen-inspired" painting, a Royal Poinciana in a park overlooking the Indian River. Among the Highwaymen to have painted a similar scene are brothers Harold and Sam Newton, along with  Sam's son, 2nd-generation artist Tracy Newton.

I chose to use this painting as the logo for the website I had just designed,  FelfoldyArt.com .

2018: Within two years, I had painted and collected far too many works to display at home.

I began holding exhibitions and sales to support local charities, a practice that I continue today.

Shown here is my first such exhibition, to benefit the visual arts program at nearby Loveland Center. 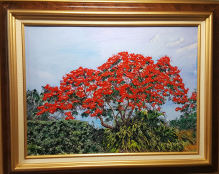 2020:  I began to use a variety of software apps to make my own photos look like paintings. Printed on archival canvas, these have become my "Photos Into Art" series.

When I really like the digital enhancement, I paint it in acrylics. Shown here is a recent treatment of my favorite theme, the Royal Poinciana. 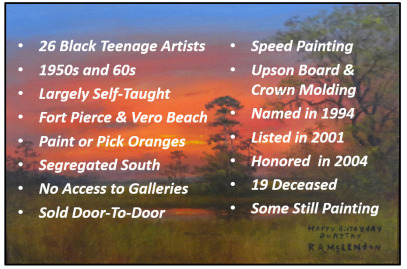 The group of Florida landscape painters that became the Florida Highwaymen are celebrated for their cultural heritage, their individual talent and their collective enterprise. Several among the group are also known for their method of painting ("speed painting" on construction materials, to increase revenue and reduce costs) and their method of selling (along Florida's highways, hence the name later given to them). Ultimate recognition came in 2004 when they where inducted as a group into the Florida Artists Hall of Fame. 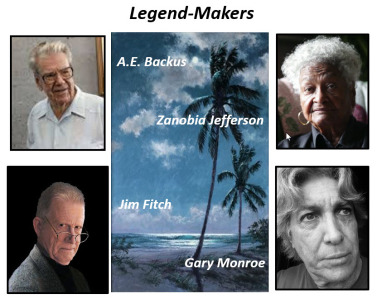 In the late 1950's Lincoln Park High School teacher Zanobia Jefferson introduced student Alfred Hair to renowned artist AE Backus, who became a mentor to Hair and other young African American artists from Fort Pierce and the Gifford area of nearby Vero Beach.

To create a greater awareness of Florida's artistic heritage, many years later curator Jim Fitch named the loosely-associated group of artists "The Highwaymen" because they sold their paintings to travelers and local businesses up and down Route 1 and into the interior of the state.

In 2001 documentary photographer Gary Monroe published a detailed account of their story in "The Highwaymen: Florida's African-American Landscape Painters". 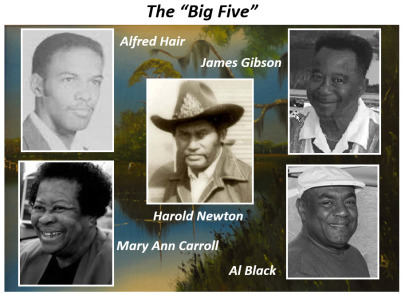 Alfred Hair developed a rapid, assembly-line technique to achieve his ambition of becoming a millionaire. Tragically, he was slain at local hangout "Eddie's Place" at the age of 29, leaving behind his wife Doretha and four children.

In contrast to Hair's speed painting, Harold Newton heeded Beanie Backus' advice to paint deliberately and in detail. The quality of Newton's works most rivals that of Backus, and today consistently draw the highest prices at Highwaymen auctions.

Hair's good friend James Gibson often claimed that "Harold was the best painter, Alfred was the fastest, but I was was the best salesman". It could well be argued that Gibson was consistently the best dressed of the Highwaymen. Until his passing in 2015, he regularly exhibited his work at Highwaymen festivals around the state impeccably dressed in three-piece suits, colorful ties and starched white -collared shirts.

Al Black became a strong contender for the best salesman title, doing much of the selling for the core group while they concentrated on their painting, and only later beginning to produce his own paintings, which he still does today as the only survivor of the original core group.

Mary Ann Carroll, mother of seven and the only female Highwayman, unable to support her family as a maid, worked odd jobs as a house painter and carpenter while producing her own paintings and bravely traveling alone to sell them, later also becoming a pastor and an accomplished musician. 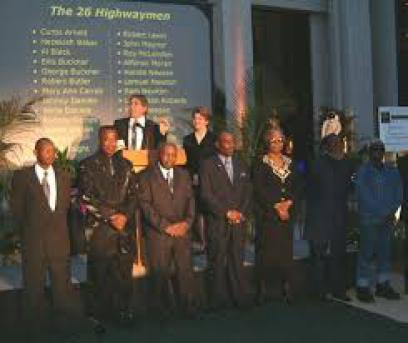 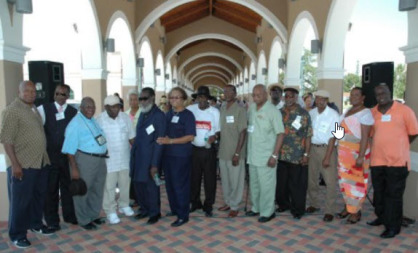 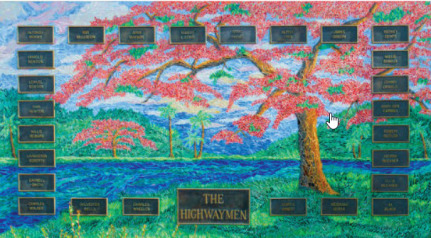 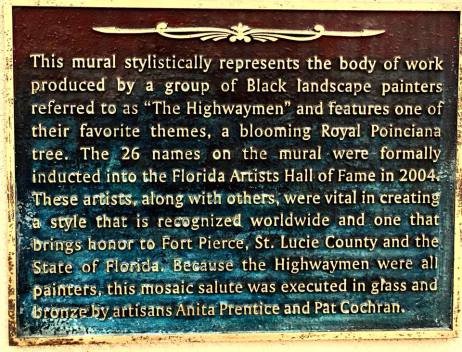 The Highwaymen and Their Art 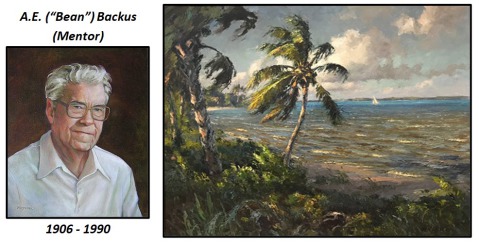 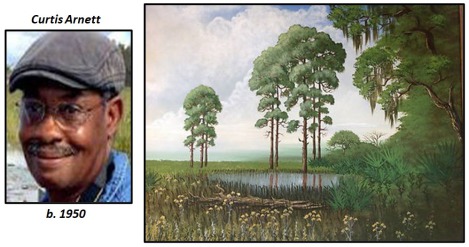 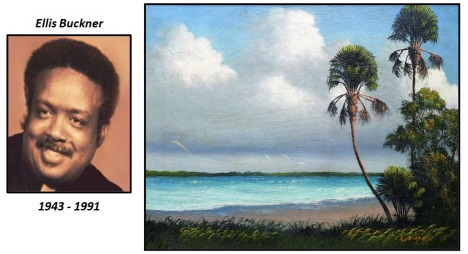 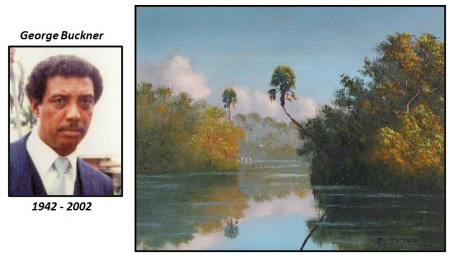 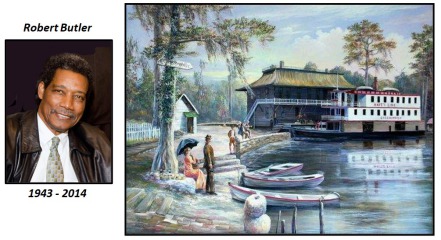 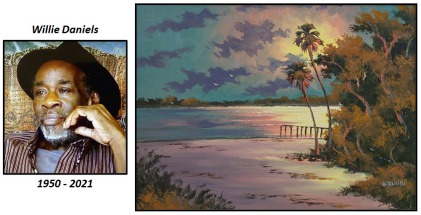 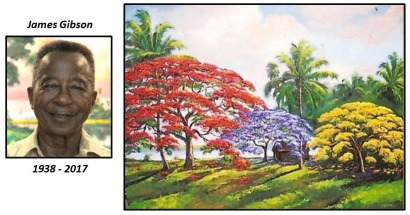 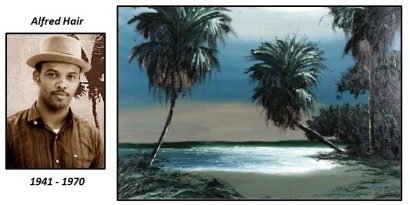 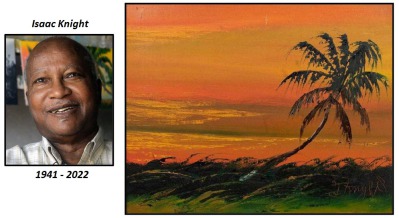 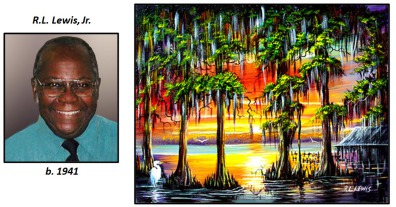 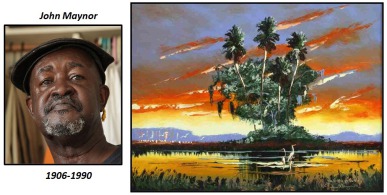 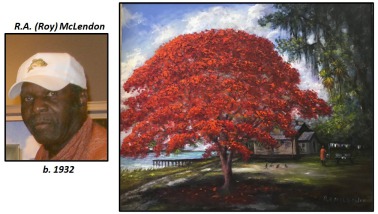 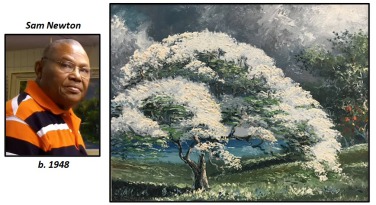 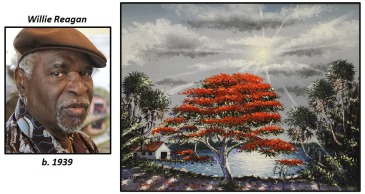 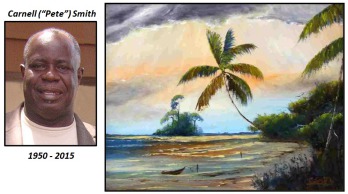 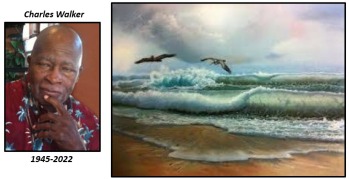 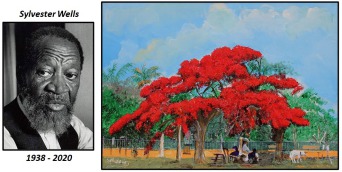 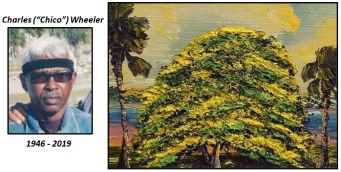 Check them out under

stay in touch and find out about special events!